Shave and a Haircut: Two Friends!

Steve Little
Dr. Julius[2] Barber is a recurring character in the series, The Marvelous Misadventures of Flapjack. He is the local doctor, surgeon, and barber in Stormalong Harbor, and runs both a barbershop and a doctor's office which are next door to each other.

Dr. Barber's design is made up of mostly ovals. He has a long head with a wide body, with thin limbs and visible lips. He doesn't have any hair on his head, though does have a long pencil mustache that also form his sideburns. Doc wears a blueish-gray dress shirt, a red bowtie, blue and white striped pants being held up by brown suspenders, and brown boots. He either wears a head-mirror or a blue skimmer depending on what job he's working on.

His work outfit is similar to his employees', although the colors of their bows and hats are switched.

Doctor Barber is considered to be unnerving to most of the townsfolk, having a weird obsession over surgery and his doctoring job to the point of purposefully messing up his patients for fun. At points, he can be considered downright maniacal, though it's often caused by poor principles. He's very strange in his mannerisms, and usually ends up doing more harm that good unintentionally. Nonetheless, he seems to enjoy actually tending to the people of Stormalong on a good day. In a few instances, Doc can seem lonely or shut-off, considering he lives with his mother and doesn't appear to have many friends nor a social life.

He has a verbal tic, often saying "hmm" and "yes" between his sentences. 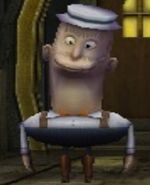 Doctor Barber, as seen as a background character in Punch Time Explosion.

Community content is available under CC-BY-SA unless otherwise noted.
Advertisement